Who owns LCC? The godfather or Lagos state government?

Contrary to popular belief that the Lekki Concession Company (LCC) is owned by a certain political godfather, new reports reveals that the parent company of the popular Lekki toll gate is owned by the Lagos state government.

According to The Cable, the sum of N7.5bn was earlier approved by the Babatunde Raji Fashola led government for the acquisition of the Lekki toll gate from the LCC however up till March 2018 with governor Akinwumi Ambode in power, there was a delay in the acquisition of LCC by the Lagos state government.

The delay prompted some concerned Lagosians to ask the reasons for the delay of the acquisition and the contract terms and agreement entered into by the state government and the LCC.

Responding to the inqusition,  the Lagos state ministry of transportation revealed it acquired the road and the LCC in December 2014 revealing that the LCC and toll gate through a share and purchase agreement.

Find a copy of the letter below… 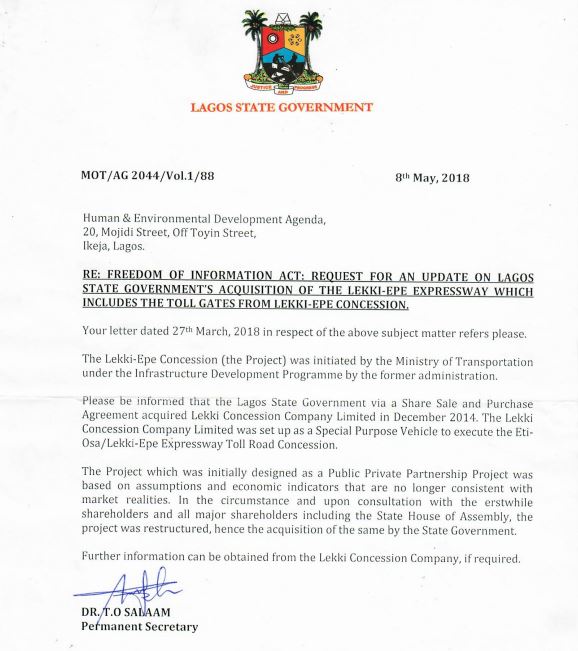 Hmmm, so baba doesn’t own the LCC? This is hard to believe.

More from my site

Olumuyiwa is the Founder of Lekki Republic. He loves to travel, explore and meet interesting people. Want to connect with him? Follow him on Twitter @Delurge.

We’re expanding from being just a lifestyle and business directory for the high brow Lagos Island neighborhoods of Lekki, Ikoyi, Victoria Island & Ajah Lagos, to creating and curating content for young people across Africa.[read more]